Home > About > Church Structure and Governance 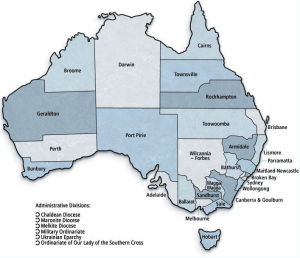 The Catholic Church in Australia is administratively and geographically divided into seven Archdioceses, and twenty-one Dioceses.

There are five Catholic Dioceses in Queensland: Cairns, Townsville, Rockhampton and Toowoomba, and the Archdiocese of Brisbane.

There are numerous Catholic school employing authorities in Queensland including the five Catholic Education Offices in the Dioceses and the Archdiocese; Edmund Rice Education Australia (Christian Brothers); and numerous other religious institutes (or Religious Orders).

The Queensland Catholic Education Commission (QCEC) serves as a peak body whose principal goal is the co-ordination and advancement of Catholic education in Queensland. The Commission negotiates and distributes government funding, advocates the position of Catholic education to government and other bodies, communicates and responds to media issues of a state-wide nature, facilitates collaboration between employing authorities in areas such as employee relations and curriculum, and researches and manages relevant statistical and financial data.

QCEC exercises certain state-wide responsibilities in respect of Queensland’s Catholic schools. Many of these are administered by the five autonomous Catholic education authorities in each Diocese headed by a Catholic Bishop.

Direct responsibility for setting policy in each Diocese resides with an education council or board. An Executive Director of Catholic Education implements that policy and administers schools on behalf of the Diocesan authority.

The Commission has the same responsibilities towards the Catholic schools which are accountable to their sponsoring religious institute rather than these Diocesan authorities. These Religious Institute schools are owned and administered by various orders of religious sisters, brothers and priests.

Members of the Board are appointed by the Bishop and usually are either from an education background or have other professional skills that are of value in guiding the work of Catholic Education. The Bishop and the Episcopal Vicar for Education are also members.

The Board meets eight times per year. Its meetings provide an opportunity for the Executive Director and staff of Catholic Education Services to update the Board on their work and the key issues being addressed at the time. The Board is also a policy-making body which reviews policy documents and major strategic decisions faced by Catholic Education, confirming these for implementation in the Catholic schools of the Diocese of Cairns. The Board also approves and monitors the Central Budget of systemic schools and the budgets of the direct-funded schools of the Diocese.

Serving the Board are committees of Identity and Mission, Education, and Finance. These also meet at least eight times per year, and have members from schools, CES, the Board, clergy, and others with expertise relevant to the focus of their work. The Board works cooperatively with the Diocesan Planning and Development Committee.

The Executive Director of Catholic Education Services has a support role on the Education Board of Governance.

Members of the Diocesan Board of Governance – Education are: